A few weeks ago, Ardon and I saw that Giant hypermart was having an offer on the Rapido 8-in-1 blender that was distributed by JML Singapore Pte Ltd. It was selling at a discounted price of $39.90. I think the original price was about twice this amount.

The blender comes with many attachments as shown in the picture below. 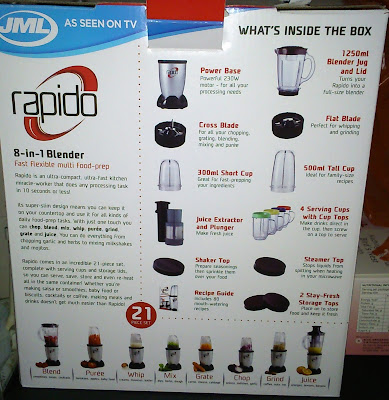 It is an 8-in-1 blender that can blend, puree, whip, mix, grate, chop and grind. It can also be used as a juice extractor.  It also comes with an instruction and recipe guide. We thought it was a good deal to buy this blender at this price.

I haven't fully tried out all the uses that were stated on the box. So far, I have ground 250 g of pork using the cross blade and tall cup. The pork was all minced up within a few seconds.

Last week, I wanted to make ice blended coffee (the weather was very hot!). First, I poured a satchet of 3-in-1 coffee into my usual drinking cup and poured a little bit of hot water, just enough to dissolve the 3-in-1 coffee powder. Then I put some ice in the tall cup and after closing it with the cross blade cover,  I placed it on the power base to crush some ice. Then I poured the crushed ice into the cup of coffee. As the coffee was hot, the ice melted almost immediately. So I didn't get the ice blended coffee effect that I wanted. There were still some crushed ice stuck around the blades and it was a bit difficult to get it out.  My cup of coffee was only half full with the melted ice in it. So, I poured the coffee into the tall cup and added more ice to it. Then I put the cross blade and closed it, placed the tall cup onto the power base and switched on. This time, I got the ice blended coffee effect that I wanted.

After I was done with this cup of ice blended coffee, Sera tasted it and liked it. So, it became her cup of coffee. So I made another ice blended coffee for myself. This time round, I poured my hot coffee which contained a little hot water into the tall cup, added lots of ice to it and started blending. The ice blended coffee texture turned out better than the first one :). 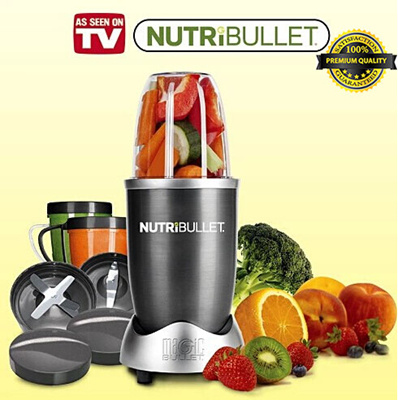