We bought our old ceiling fans with included light kits at a sale a few years ago. The fans were sold at a low price with the light kits included at only $1 each. At that time, it was a very good offer that we couldn't resist buying. We were then looking into ways to reduce our electricity bills and the ceiling fans did serve that purpose. However, the blades were not smooth enough as they were made of wood. Dirt and dust tended to get trapped and hard to remove if cleaning was not done often. Not to mention that they were white in colour! After the most recent cleaning of the fan, the light kits would shake violently when the fan speed was switched to the highest level. We were forced to stay on speed number 2, which would still be very warm on hot days. Speed number 1 was also spoilt for more than a year.

Each light kit had 3 light bulb sockets. One by one, the sockets failed. Eventually we were down to only 3 light bulbs for the entire living room area. There was also the problem of the shaking light kits highlighted earlier. Since all of these repairs were not covered under warranty, we decided that it was time to get new ceiling fans.

From what I gathered, KDK is an old and trusted brand. However, it is more expensive and has limited choice of light kits. Its products were only protected by one year warranties. Crestar and Fanco were the next two well known/popular brands. Crestar fans offered a one year warranty on parts and 10 years warranty on motors. Fanco fans have lifetime warranties for their motors.

We wanted ceiling fans that used E27 light sockets for their light kits. E27 light bulbs are easier to change when they burn out and are easily available in many stores. Since we always went to NTUC Fairprice hypermarket for groceries, we took the opportunity to look at the ceiling fans on sale there. They were mainly KDK and Amasco fans, costing more than $300 each.

I did google searches online and found a shop near our place that sold ceiling fans. Quite a number of shops were not opened that week as it was the first week of the Chinese New Year. This shop was opened on 5 Feb 2017 and we wanted to get it done as soon as possible before the weather gets too hot.

We were considering between Fanco and Crestar. The sales lady told us that Crestar ceiling fans are made in Taiwan, so they are more durable and more expensive than Fanco's ceiling fans. We also asked about using built-in LED lights in the Crestar ceiling fans. She said that, usually, the built-in LED lights should last for a long time. We were told that for this type of light/lamp, if the light is spoilt, we would need to get the agent to come and replace the lamp. This could easily come up to $100++. The lamp is also not as bright as those that used the open style light kits that used E27 light bulbs.

The sales lady suggested that we could use remote control to operate the ceiling fans as it is more convenient. However, we had a bad experience with remote control in our previous ceiling fan. When the remote control sensor/PCB board were spoilt, we were short of one lamp and ceiling fan to use for a few days before the agent could send someone down to repair it. We wanted to keep things simple and low maintenance. So we chose the Crestar fan that could use the light kits that comes with E27 light sockets. Even though the built-in LED lights should be more durable and do look neater than the E27 bulb light kits, there was no guarantee that the built-in LED lights will last long enough. It also seemed that the usage tests on how long the built-in lamps are supposed to last are usually based on only a few hours a day (probably night time).

We chose the Crestar Hypac because we wanted acrylic blades for the ceiling fans. We liked the fact that acrylic blades are lighter and smoother than wood. This would make them easier to clean. The model we chose came in sizes 48 inch (122 cm) and 54 inch (137 cm) for this model. We thought the 48 inch blades might not be windy enough for us. Our old ceiling fans were 52 inches. So we opted for the 54 inch Crestar Hyperpac ceiling fans. Of course, this time round, we chose black colour for our ceiling fans. We also used strings as the mode of operation for the fans and lights.

Delivery and installation were arranged for 3 days later. At first, one of the fans' light kit would shake when the fan was switched to speed number 2. The contractor/man who did the installation explained to us that this was a balancing problem that could be fixed very easily. He went on to fix the problem and the fan worked fine with no shaking of the light kits. 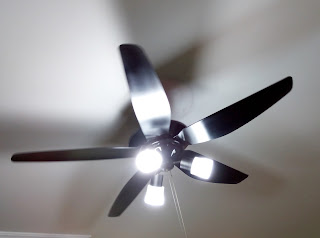 The wind from speed 2 of Crestar Hypac is equivalent to the wind generated from speed 3 of our old ceiling fans. That's one plus point. I chose a light kit design that was different from the previous fans. The kids also agreed that the new fan and light kits looked better than the previous ones. :) 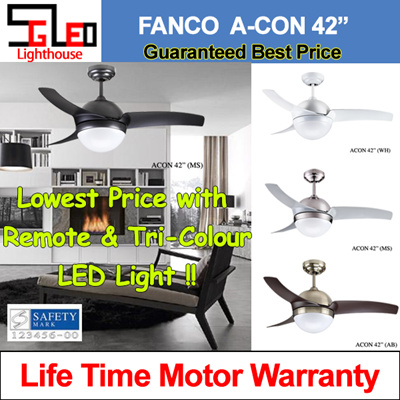